FLIGHT GA-150 BK – Grand Auditorium guitar with cutout. Acoustic guitar GA-150 BK is a guitar with a voluminous body, due to which the guitar has a loud sound. The spruce top gives the instrument a bright, sonorous, clear and even sound. The back and sides are made of sapele, which has good resonant characteristics. The neck is made of sapele, the fretboard and bridge are kabukali.

Guitar FLIGHT GA-150 BK combines well with other instruments, both in the studio and on stage. If you're looking for a versatile guitar, the FLIGHT GA-150 BK is the one for you. The Grand Auditorium body type is one of the most popular models, a cross between the Dreadnought and the Grand Concert. While the larger Dreadnought has traditionally been considered convenient for picking and the smaller Grand Concert for fingerplay, the GA was deliberately designed to serve both purposes.

Thanks to this shape of the body, FLIGHT GA-150 has a distinctive acoustic sound, powerful enough to be played with a strike or a pick, with impressive balance throughout the range (especially in the middle frequencies), reproducing clear and clean tones. 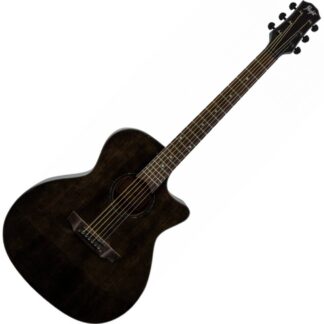